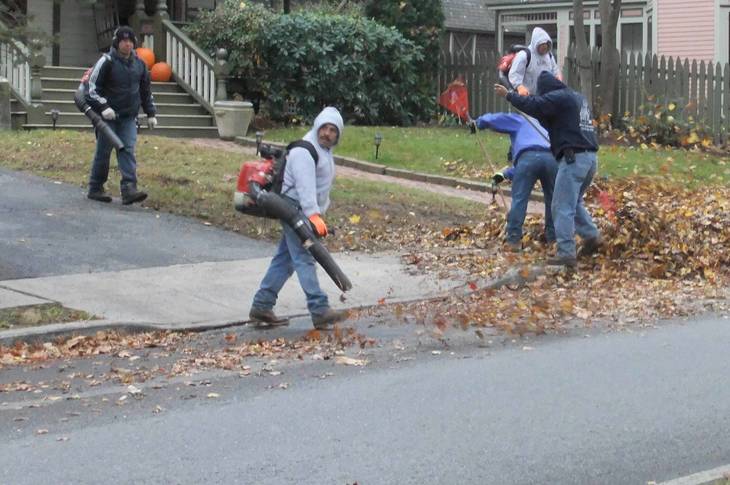 Editor’s Note: The print version of this article incorrectly listed the gas-powered leaf blower restrictions. We regret the error.

BEDFORD, N.Y. – Some say Bedford’s new law restricting gas-powered leaf blower usage is too onerous on landscapers and homeowners, while others say it doesn’t go far enough in protecting residents from their environmental and health hazards.

“I had a boss once who told me that a compromise is when everyone goes away unhappy,” resident Andy Green said at the June 19 hearing on the law. “By that definition, I think you’ve got a good compromise working.”

Sign Up for Katonah/Lewisboro Newsletter
Our newsletter delivers the local news that you can trust.

The law was approved by a 4-1 vote by the Bedford Town Board. From Sept. 16 to May 14, all Bedford homeowners will only be permitted to use gas-powered leaf blowers between 8 a.m. and 6 p.m. on weekdays. In the leaf blowing “off-season,” from May 15 to Sept. 15, those weekday hours are narrowed to between 9 a.m. and 5 p.m. Throughout the year, usage is limited to between 10 a.m. and 4 p.m. holidays and Saturdays.

The law was developed by the Bedford Leaf Blower Task Force, whose members were appointed by the Town Board. Fiona Mitchell, who co-chairs the task force, said gas-powered leaf blowers disturb the peace for many homeowners and are harmful to the environment and people.

“It’s far from what the task force was looking for, and we’re actually disappointed it doesn’t go further,” Mitchell said. “But, we do acknowledge that it’s a good start.”

The Town Board actually approved two parts to the law on June 19: the hours of permitted leaf blower usage and the creation of designated “Hamlet Zones” in Bedford, Bedford Hills and Katonah. Dozens of neighborhoods are included in these zones, but many of the homes are a quarter-acre or less in size.

Throughout the year, homes in these Hamlet Zones can only use one leaf-blower at a time and push-behind blowers are prohibited. No gas-powered leaf blowers are allowed at all during the “off-season.”

The hours-long public hearing featured dozens of residents who spoke out in support for or in opposition to the laws. By considering a law that only affects owners of quarter-acre properties or less, several speakers accused the board of discriminating against lower-income residents.

“How did you come up with the list of the streets?” asked Sean Rooney of Babbit Road, whose home is in a “Hamlet Zone.” “Is it how much money we make? Because we have little properties and we can’t afford to have landscapers? That’s what it comes down to.”

Rooney said the town’s police department has more important issues to worry about than regulating leaf blower usage. He also questioned the domino effect the law might have on other gas-powered landscaping equipment, such as lawnmowers, snowblowers, chainsaws and weedwhackers.

Resident Christopher Ward agreed, saying this law may financially burden landscaping companies that cannot perform as many jobs as before or companies that may have to purchase new equipment. The revenue shortfalls would then be felt by the employees, Ward argued.

“I don’t think you as elected officials want to stand behind something like this, because it’s going to end up costing your seat eventually,” Ward said.

Other residents, however, said the inconveniences this may cause homeowners and businesses are outweighed by the environmental and health effects of gas-powered leaf blowers.

“I very much hope this is not going to be a case where pollution and inconvenience and cost win out yet again,” resident Andy Green said.

John Fry, a member of the task force, said people decades ago got by without the use of leaf blowers. He said many homeowners today strive to keep their lawns and driveways in “pristine” condition.

“The cost in noise and pollution of achieving this aesthetic has been severe,” Fry said.

Several other residents supported the law but said they were disappointed that it didn’t ban gas-powered leaf blowers altogether, saying they are especially harmful to the employees who use them.

Peter DeLuca, who owns a landscaping company in Katonah, said the Town Board and the residents who support the law were being hypocritical because the production of batteries in cordless leaf blowers, which are not being restricted, is also harmful to the environment.

“They produce the battery, they pollute other parts of the world, and that’s perfectly fine because we’re going to have clear air in Bedford,” DeLuca said.

DeLuca said he would not allow his employees to wear battery-powered leaf blowers because the health risks they pose.

Resident Nancy Brown was conflicted. Though she supported the law, she thought it should be put to a town-wide vote. Town Attorney Eric Gordon said that, in New York State, this is not the type of law that can be voted on by referendum.

Supervisor Chris Burdick supported the law, though he said he recognized many residents were opposed and viewed it as a burden. He said he would like to work with local proprietors on possibly offering discounted electric leaf blowers to residents.

Councilwoman Lee Roberts said the law is a compromise that will address the areas most negatively affected by leaf blower usage: densely populated neighborhoods.

“We are a community of residents who care very deeply about the environment, and this is only a small step in making our air cleaner and our land healthier,” Roberts said.

Councilwoman Mary Ann Carr said it would have been “too much” to implement an off-season ban that affects the entire town, but said the board may re-visit the law in a few years.

Councilwoman Kate Galligan said board members “struggled” with the law because of the Hamlet Zones.

“There’s no perfect way to do it and we went through many iterations to get to the point where the task force ended up,” she said.

The lone dissenting voice on the board, Councilman Don Scott, said he supported “90 percent” of the law, but, in reversing course from his previously stated position, did not agree with the “Hamlet Zones” and making separate rules for separate homeowners.

“I think what’s good for one is good for all,” Scott said.

Scott said he was persuaded by the hundreds of emails he received from aggravated homeowners who felt they were being discriminated against.

“No one up here is affected by the Hamlet Zone, and I don’t think that looks good,” Scott said, referring to the Town Board.

Scott made a last-ditch effort to have his colleagues reconsider to no avail. After they approved the hour restrictions, Scott suggested upping the “Hamlet Zones” to half-acre homes instead of quarter-acre homes. A motion to table the law for two weeks to consider Scott’s amendments was voted down, 4 to 1.

The law will take effect in August.