Residents Want Board To Go Further With Leaf Blower Law 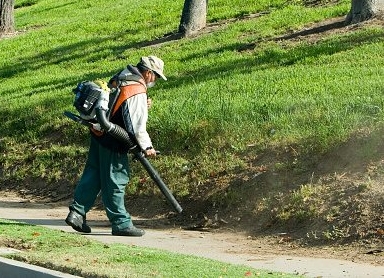 A group of Huntington residents are asking the town board to go further with its proposal to further limit the use of gas-powered leaf blowers on Sundays and legal holidays. (Photo/Facebook/Huntington CALM)

A group of Huntington residents has asked the town board to go further with a proposal to further limit the use of gas-powered leaf blowers within the town’s borders.

The town board is currently considering an amendment to town code that, if approved in its current form, would create an additional two hours of noise relief on Sundays and legal holidays as the usage of leaf blowers would be limited on those days to 11 a.m.-5 p.m.

On Tuesday at a public hearing on the board’s proposed amendment, nine residents, many members of local advocacy group Huntington Citizens Appeal for Leafblower Moderation (CALM), asked the board to take more drastic measures.

“You have acknowledged that gas leaf blowers are a problem in our community,” said CALM member Bonnie Sager. “Unfortunately the proposed change is not meaningful legislation.”

Sager also cited existing legislation in the municipalities of North Hempstead, Great Neck Estates and Westchester County that bans the use of leaf blowers during summer months. She asked the town board to consider a similar ban.

Similarly, Dr. Lucy Weinstein, a Huntington-based pediatrician, called the board’s proposal “minimal legislation” and asked it to expand the amendment to “at least include a summertime ban.”

Weinstein added, “Gas blowers expose us to an unnecessarily high levels or exhaust pollutants, noise and cause the suspension of dust and particulate matter… The health of the children of Huntington is at risk.”

Weinstein, and other speakers, suggested that landscaping companies switch to battery-powered blowers to avoid both noise and air pollution typically caused by two-stroke engines of gas-powered blowers.

A tenth speaker asked the board not to ban the use of blowers on Sunday mornings as they are used in golf course maintenance.

The town board could vote on its proposed leaf blower legislation as early as the 2 p.m., July 17 town board meeting.